River Monster Guide Service (RMGS) is focused primarily on the world-class smallmouth bass fishery of the New River from our Virginia location. The New River is an amazing river for a number of unique reasons. It’s river system is the oldest on the North American continent, second only to the Nile River as the oldest river in the world. With the convergence of the North Fork and South Fork of the New River in North Carolina, the New begins a northward flow which carries it 320 miles through Virginia and into West Virginia eventually joining the Great Kanawha River. It is one of only a handful of major river systems that flow North. The New is a sportsmans paradise, offering fishing opportunities for no less than 15 freshwater game fish. Virginia state record fish that have been caught from the new include smallmouth bass, spotted bass (New River impoundment – Claytor Lake), yellow perch, walleye, and musky. The New has produced state record catches of smallmouth bass and white bass in West Virginia. The majority of our trips on the New occur in Virginia and West Virginia, though we do conduct trips in North Carolina as well. Given the sheer geographic distances that the New River and its tributaries cover, we can generally find fishable water when other areas are unsuitable for any number of reasons.

The North Fork of the Holston River flows approximately 100 miles through Southwestern Virginia before flowing into Tennessee. While all of this water provides excellent habitat for trophy smallmouth bass in excess of 5 LBS, we focus on the 30 plus miles from the town of Saltville, Virginia, to the Tennessee state line. In recent years, this section has been determined to hold more bass in the 14″ to 20″ range than any other river in the state. It is a smaller river best suited for canoes and kayaks but if numerous big fish are what you are seeking, this may very well be the trip for you.

The Clinch River has roughly 100 miles of navigable water to fish within the state of Virginia before crossing into Tennessee. The Virginia Department of Game and Inland Fisheries website states that the Clinch contains more species of fish than any other river in the state. The Clinch supports healthy populations of a variety of sport fish. Anglers can catch smallmouth bass, spotted bass, rock bass, sunfish, crappie, walleye, musky, freshwater drum, long nose gar, and channel and flat-head catfish. Although not listed, I have personally caught citation trout as well. The Clinch also supports one of only two sauger populations in Virginia. If you are an angler that enjoys catching multiple species of fish, then certainly consider a trip on this beautiful river and see some amazing scenery as well. ​

The Greenbrier River is located entirely within the state of West Virginia. From it’s source in Pocahontas County, known as “the birthplace of rivers”, the Greenbrier River flows 173 miles before emptying into the New River in Hinton, Summers County, WV. The Greenbrier is the longest free flowing river in the southeastern United States, untouched by mans proclivity to dam rivers and waterways. Smallmouth bass are the dominant species of this beautiful river. Riffles and deep pools hopscotch one another along the length of the river, providing excellent habitat. 50 fish days are not uncommon and trophy fish are constantly a possibility. 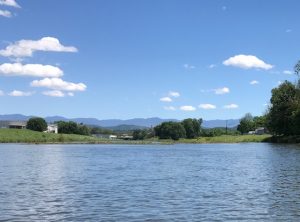 The Little Pigeon River may be the most recognized of any river that we fish due to it’s drainage through Tennessee’s major tourist towns of Gatlinburg, Pigeon Forge, and Sevierville on its short journey to the confluence with the French Broad River.  Formed in the high elevations of the Great Smoky Mountains and traveling along major thoroughfares  for the masses of visitors to our nations most popular National Park, the Little Pigeon is greatly overlooked as a prominent smallmouth bass fishery.  It should NOT be.  Spring runoff from the mile high peaks of the Smokies provide ample flows to navigate the 4.5 miles from Sevierville to the mouth of the French Broad.  There are some real Monster smallies along this section and various other game species to make this float a “must do” for anglers visiting the park with a day to spare and a penchant for big, trophy smallmouth bass.

Although the Pigeon River and the Little Pigeon River are not of the same river system, they do drain much of the eastern portion of the Great Smoky Mountains.  The Pigeon, named for the now extinct passenger pigeons that once used the river valley as a migratory route, starts in North Carolina and flows northward into Tennessee before joining the French Broad River above Douglas Lake.  The pigeon is a champion of clean water legislation and better industrial practices.  For the better part of the 20th century the pigeon was devoid of life from all of the contamination stemming from the paper mill in Canton, NC.  Today, there have been a minimum of 20 fish species reintroduced to the river and the smallmouth bass is thriving.  The Pigeon is used by many rafting companies because of its narrow gorge and excellent whitewater opportunities.  That being said, this river is not for novice boaters/paddlers and should always be treated with respect.

The French Broad River flows 218 miles from Transylvania County, NC into the state of Tennessee.  The French Broad is the third oldest river in the world.  Its confluence with the Holston River in Knoxville is the beginning of the Tennessee River.  This river has great potential to produce trophy smallmouth bass as the Tennessee Wildlife Resource Agency has imposed an 18″minimum size limit with only one fish of that size or larger to be harvested by an angler.  The French Broad has a variety of gamefish that can often be caught incidentally while fishing for smallmouth bass and certainly can be targeted specifically.  Of these, are walleye, sauger, white bass, hybrid striped bass and crappie.  With its proximity to the bustling city of Knoxville and the popular tourist areas of Pigeon Forge and Gatlinburg, this fishery is an excellent option for travelers to the area. 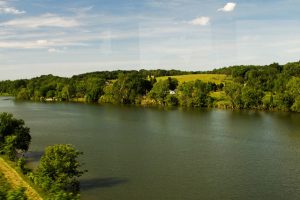 The Holston River, within Tennessee, is a 136 mile river that flows from Kingsport to Knoxville where its confluence with the French Broad River forms the mighty Tennessee River.  Below South Holston Dam exists an amazing trout fishery for quality brown and rainbow trout.  The Holston is wide and open which provides a great opportunity for fly fishermen to ply their skills at trophy trout.  As the river makes its way towards Knoxville, it is once again impounded.  This time by Cherokee Lake.  Below Cherokee Dam is another excellent spot for anglers wishing to target trout with fly rods and spin gear alike. The cold temperatures that occur within the depths of Cherokee Lake begin to rise with its westerly flow and the opportunity to catch smallmouth bass greatly increases.  It is within this area that we concentrate most of our efforts as smallmouth bass are our primary target species.  (*Please note that any angler wishing to target trout will be accommodated as such and we can tailor a trip to suit your preferred fishing style and species.)  The Holston is one of the least accessible rivers that we fish in TN and float trips are essential to gain access to the best areas. 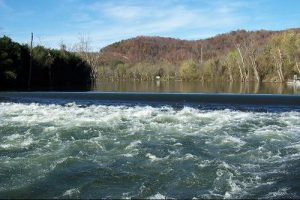 The Clinch flows over 300 miles from Virginia to the Tennessee River.  The section that we focus on within the state of Tennessee is the 13 mile section from Norris Dam to the upper reaches of Melton Hill Reservoir.  This section is considered by many anglers that have fished the premiere trout waters of the eastern United States as one of the top destinations as a tailwater fishery for rainbow and brown trout in the entire country.  Through extensive efforts by the Tennessee Wildlife Resource Agency, the fishery continues to improve by regulated size limits (14′ to 20′ trout must be released with only one over 20″ allowed to be harvested per angler/per day), increased oxygen levels, and improved habitat for macroinvertebrates which are the primary food source for trout.  The TN state record brown trout of 28 pounds 12 ounces was caught within this section of the river in the late 1980’s and browns over 30 pounds have been electroshocked during sampling and found dead by anglers.  Rainbow trout over 10 pounds have also been caught within these waters.  For trout enthusiasts, this is a “bucket list” destination.

The Nolichucky River flows from Western North Carolina 115 miles into East Tennessee where it joins the French Broad River in the upper reaches of Douglas Lake.  The Nolichucky is dispersed with relatively calm water and often times extremely challenging whitewater.  The section referred to as the Nolichucky Gorge is a popular destination for whitewater rafting companies, kayakers and canoeist.  There are few rivers in the southeast that can rival the scenic backdrop offered by the Nolichucky, as it drains some of the highest elevations east of the Mississippi River.  The Nolichucky is an excellent smallmouth bass fishery, which places it high on the list of fishable rivers for our outfitting service.  It also provides an impressive fishery for trout and musky. This is a challenging river and is generally deemed fishable or not by the weather and rain in the higher elevations of Mt. Mitchell and the Unaka Mountains.  As such, contact us prior to planning a trip on the Chucky to gauge its flows and conditions.